My wife and I judged the Yes! Weekly margarita wars on Saturday afternoon. For us, this was a blind tasting. Personnel from the newspaper brought margaritas from each of the sixteen restaurants that entered the competition, and we labelled them by number. At no time, until the end, did we know who made what. We did not try to drink all of sixteen full sized drinks- a recipe for disaster. Instead, a sip or two established a clear initial impression.We marked each number on our score sheet with two ratings- one from my wife, the other from me. As it turned out, we agreed each time (unusual for us!).

Two criteria emerged right away. Some were just too sweet for our taste. And others just did not taste like a margarita. Drinks with upfront cucumber flavor might well be very good drinks, and we thought they were very good, but we just did not consider cucumber the appropriate primary flavor for a margarita. This Round One sampling eliminated ten of the sixteen entries. We tasted the other six in more detail, and that left us with two clear finalists- number 3 and number 10.

But both were getting a little watery by this time, especially number 3, since it was one of the first to arrive, vs. number 10, which was served to us about 15 minutes later. Ice melts. So we asked for a second serving of those two. Both were quite good. But halfway into this tasting round, a clear winner emerged. We found out after we turned in our scorecard that The Treasure Club had landed in second place, and Frida's, a new Mexican restaurant in Kernersville, had won.

It's a tough job, but somebody has to do it. 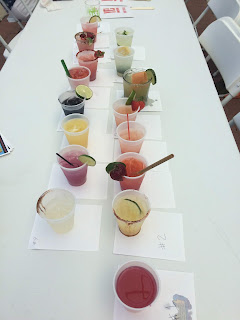 Posted by John Batchelor at 1:13 PM