I was one of the judges last Saturday for the North Carolina Food Truck Championship, held each year in Randleman. It's a fun way to spend an afternoon. In addition to a lot of good food, I am amazed at how good the music always is.

The Shrimp Truck won a tie breaker for first place, for their Shrimp Tamale  with garlic cream sauce. I was impressed with the scratch preparation and the flavor, as well as the fact that they were able to deliver perfectly cooked shrimp under such difficult circumstances. They almost won last year. 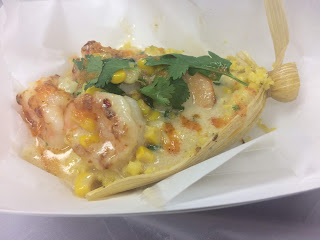 Ghassan's, another perennial finalist, initially tied for first place, but subsequent discussion among the judges moved them to second. Their entry was Chicken Schwarma. This is one of my personal favorites. The food at Ghassan's just tastes so good, due to their Middle Eastern enhancements. 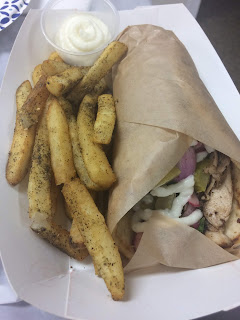 Third place went to Bulkogi. They served chicken and beef Korean barbecue topped with a fried egg and spicy aioli. Once again, I was impressed that these folks could deliver a perfectly fried egg under such circumstances. 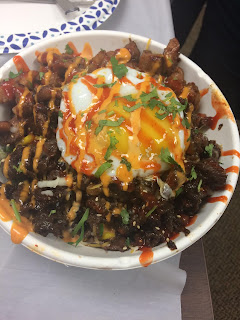 A couple of general observations, based on this and numerous other competitions I have judged. I would urge participants to think, above all, about what ingredients can be prepared and served under the circumstances. Participants who make everything from scratch using fresh ingredients, including (especially) French fries, score higher. Frozen or any other type of prepackaged ingredients erodes scores. The other factor that often hurts entries is presenting more than one dish- often three or four. If they are all equally good, maybe that helps. But in my experience, one is almost always better than the others, and if the entry had been based on that one dish, scores would have been higher. Multiple dishes risk pulling down scores for the best dish. Hope these comments help future competitors.
Posted by John Batchelor at 8:08 AM